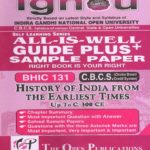 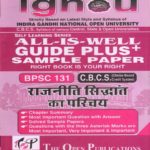 Based on Indira Gandhi National Open University (IGNOU) Self Learning Series All Is Well. IGNOU IGNOU BHIC 131 History of India From The Earliest Times Up To C 300 CE Guide Plus Sample Paper English Medium. Right Book is Your Right. Strictly Based on Latest Style and Syllabus of Ignou.

We honestly hope that the salient features of the books published by The Open Publications will convince the teachers as well as the students to buy them and be benefited themselves to most.

Deals with the sources of ancient Indian history, because before we get to what happened in the past. it is imperative to know about the sources on the basis of which we “re-construct” our past. Archaeology is an important source, particularly for the periods for which there are no written documents.

Discusses the nature of archaeology as a source, the sophisticated methods of exploration and how techniques from the scientific disciplines are being used in the analyses of archaeological data.

As for the study of the history of a country an understanding of its physical features and how it determined and influenced the birth and evolution of human cultures and civilizations are absolutely necessary. Such parameters as settlement patterns, population density and trade, formations of regions have been given due importance.

We begin tracing Indian history with the pre-historic Hunter-Gatherers. An attempt is made to make you understand the various ways to reconstruct their history, about their subsistence pattern, the kinds of tools they used, their art such as the cave paintings which throws light on many aspects of their lives etc.

Witnessed the shift to the establishment of kingdoms, oligarchies and chiefdoms in north India for the first time in Indian history. The changes in polity were accompanied by urbanization and the transition to kingdoms was a pronounced departure in the formation of state.

That Arrian’s accounts are the main source of Alexander’s campaigns. He has left in his Indike some factual, some fanciful account of India which is based on the accounts of other travellers.

Their subsistence – pattern, the basis of clan ties and kinship in the political authority, different levels of political control and various details of the chiefdom resembling political formation.

The books are prepared according to the syllabus prescribed by IGNOU. All types of questions with their complete answers are given. Explanations of difficult terms are also given so that the students may understand the text without any difficulties.

account
You've just added this product to the cart:
Hot OfferBUSINESSPICK UP
WhatsApp

We are now ready to deliver across India! COD & Prepaid payment available on all orders. {Due to extensive lockdown in some states against fight with Covid-19, logistics movement affected. Please expect delay in Delivery of your Books.} #StayHome StaySafe- THANK YOU FOR CHOOSING US! Dismiss